So off we went from Santa Fe, headed for a short (and consequently very-popular) sixty-minute drive to Bandelier National Monument. We spent the night at Juniper Campground there, predictably surrounded by juniper trees and a mild smattering of other visitors.

Bandelier is a very cool place. This was my second visit. Mike and I made a trip here probably 10 years ago. Thick wooden ladders take those willing up into abandoned cave dwellings, the ceilings black from ancient smoke. In some places the support beams remain, or, if not, then the evenly-spaced perfectly round holes where they were. Multi-story stone houses once stood in front of the cave rooms. 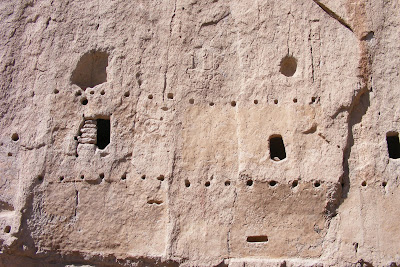 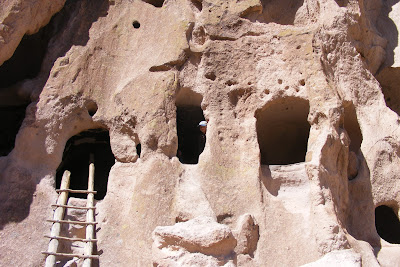 Bandelier is not in a land hyper-severe where you can easily buy into the centuries between the then of a vibrant community of real people and your water-privleged life of convenience, though it has just enough crag and rock funk to appeal to the exotic. People lived here. Heck, I'd have lived here. Stream, canyon, trees, rock walls willing to give just enough to house your family, shade them or warm them depending. In short, good energy.

I feel like I rushed too fast through the small museum. I often burn out quickly on information presented in this way, and so may have just fallen into old habits of “skimming” the displays. But the ones at Bandelier are well-done and interest me as others sometimes don't. Trilingual translations of key elements. Speculation on what went on and why it stopped.

I must accept that Isaac will have his own experience of this journey, no matter what I attempt. He was bitten by a fire ant. (Very exciting.) He spent a long time conducting scientific experiments on various sizes and states of pine cones in order to determine their viability for a new truck bumper he was inventing. (Very serious.) And at the dwellings themselves, there he was shouting down to me from a window in the rock face: “There's CHINESE writing in here!!” Ah. Yes. Well. 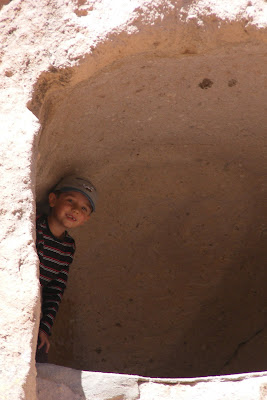 We reluctantly left Bandelier and headed north on US 285, where we encountered the New Mexico Department of Transportation doing their best at cultural awareness. Native, or native-like art – I'm not sure which – lines the highway walls. And the overpasses – I couldn't help but notice the words painted there. “K'uuyemugeh” says one – Tewa for “place of the falling rock” (not to be confused with Tiwa, the oral language of the Taos people.) “Posuwaegeh” comes the next -- “place to drink water.” These are the original names for the villages that stood here.

The story is not just what used to be, but it is a story of overpasses, a story of what might still be trying to be, what would have been, the dispersion of who has access to it now and for what purposes... I could include the transliterations of those Tiwa village names, but from what I've read, they're really just the already bastardized Spanish versions. So many layers to try to see through to the past.

The overpasses as somehow “tribute” to the people who once lived there remind me more than a little of how we have a penchant for naming streets after what was sacrificed for the streets themselves. “Maple Grove,” they are called, “Stag Leap Lane.”

There is it again; our oft-discussed love affair with the road. And yes, I see the irony? hypocrisy? of writing this from my road trip.

And since I never lack for stores of irony, this bit – I think I became convinced with some finality that a move to Massachusetts from California was in order one day back in January. The weather was in the 70s and Mike and I were on a date, driving south on Highway 1 with the top off his Honda del Sol. I was weary of people constantly asking me whether I was “ready for the snow” when I mentioned the move, and the fact that I'd know in more absolute terms that I'd do it while basking in January's sunny splendor is just somehow fitting. Our adult aversion to snow has so much to do with how it affects our ability to ... drive. Think about it.

I consider Bandelier in the snow and I think of beauty. Likewise the Taos Pueblo, which was our next stop.

Continually inhabited for 1,000 years continuing to present day is Taos Pueblo – where a timid college girl toured around our group telling us about life there and the horrors of our government. Afterwards, we explored on our own and shopped around the many craft-filled adobes. I dreamed of unlimited funds and a way to transport delicate pottery I watched being hand-painted, but then came to my senses and bought a small, clay bowl in the traditional Taos style.

There is Red Willow Creek that runs through the Pueblo, its source Blue Lake over the mountains – taken from the Taos in 1906 and returned after a long, ardent fight in 1970. There is no electricity or running water allowed within the walls of the Pueblo where today only 40 people live full-time, though many more have homes they occupy on feast days and many live on the Taos acres outside the walls. There is the Catholic church, complement by now to their nature-based religion, full of saints whose clothes change for the seasons and who were the only things besides the bell tower to survive the US Marshall ordered canon fire that hit the old church in the early 1700s – retaliation for the slaying of the US-imposed Governor Bent. They had hidden the women and children there, thinking it a sanctuary.

I did not pay the extra money to register my camera in order to take pictures. I'm not exactly sure why I made that decision. Maybe forced into the choice, I decided on having the experience as opposed to framing moments I'd viewed through the lens. Sacred mountains, a bloody history, secrets of the kiva... There is so much already between us. 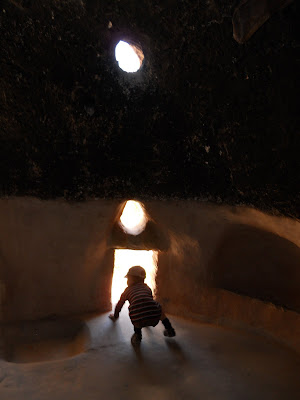 "I decided on having the experience as opposed to framing moments I'd viewed through the lens." - exactly.