Wait
Don't go too early.
You're tired. But everyone's tired.
But no one is tired enough.
Only wait a little and listen.

The memorial brick for my mom should be installed this weekend at Leaming's Run Garden in Swainton, New Jersey. Here's what it looks like. 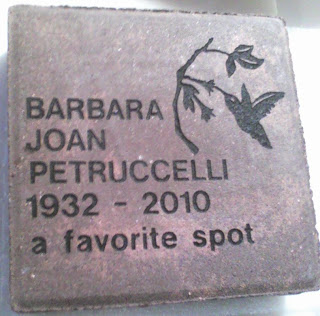 I recently found out that I lost two mothers last year. When I was in college, I spent a summer in Yucatán, Mexico. I lived in a small town with a host family that included four boys between the ages of seven and 16. My brothers. When two of them and I reconnected on Facebook, I discovered that their mom, Esther, had passed away last March. I was there, it was that summer, when she first discovered the cancer. I didn't make it back before it took her. She was a lovely woman, a teacher who as a child had to struggle to learn Spanish in school – her first language being Mayan. She didn't marry until she was 30 years old, unheard of in her community. She was fiercely dedicated to her faith. And I was privileged to be her only daughter for a few months a long time ago. I wish I could include her picture, but of course, it's packed.

Now, I will be a mother again myself. In all of the fuss and stress and planning of the move, the pregnancy has sometimes slipped back into the recesses of our days. I don't like this and, apparently, either does my body. I've had some issues with signs of preterm labor that have been worrying to say the least. I've had to stay off my feet as much as possible in these last weeks as time ticks away and the to-do list never seems to shorten. But baby kicks me constantly, letting me know s/he is in there, reminding me that despite it all, s/he's growing, s/he's alive and well, that s/he's exploring, that s/he is pretty jazzed when the ice cream comes, that s/he's firmly here and along for the ride.

Shouldn't we be escorted out
as we are escorted in
to this world? When we go
there should be showers
and ceremony. Stretchy pants
with monkeys and beanies
stitched in hippos. Primary colors.
Cards with balloons. And most of all
our mothers should be there singing Hush
Our mothers, to show us this new
and strange world we will enter.
Our mothers to hold us while we sleep.

This is a lot. I know this is a lot.
I do like the image of our mom to sing hush and show us into our new world.
Mike will surely do his best to see you can get some calm, off-your-feet time, but I know you will do your best, too, for all your sakes.
Do I say "I know" a lot? Well, what good is being a know-it-all sister if I don't know things like this?

I love the memorial stone. I'm so glad everything went well with the baby, and I love the quote from Kinnell and the poem at the end! Did you right that? It's perfect!

Kitty, was the baby born at home? I had midwives with 3 of my 4 children and two of them were born at home! Poetry and Midwives, and moving to Massachusetts? Perhaps we have more in common than your just mother?