Iz: Do we have any cardboard? I want to make a sign.

Iz: One that says, "Please Don't Park In the Driveway" so Daddy won't drive on the beautiful chalk mural I'm going to draw.

(After obtaining cardboard and pen, we sit on the front step...)

Me: What would "Park" end with?

Iz: Hey! Are you trying to learn me to read??

Me: Wouldn't think of it, kid.

Is it my fault that Isaac is in love with the "Rent" Soundtrack? The boy has taste. Is it any worse than him running around the house singing "Ay ay ay, put your hands up high, 'cause you never know how long you're gonna live 'til you die" from Spearhead? Like I said, taste.

"The opposite of war isn't peace, it's CREATION."
- from "La Vie Boheme" (Jonathan Larson)

Going back to clean out the house – the return trip


I was in Midway airport. Why do I constantly seem to be in Midway airport?
“Shiiiiine-'em-up! Shiiiiiiiiiine-'em-up!” says the man. He calls out again through the din of summer travelers, apparently undeterred that most all of them traipsing by are in flip flops and tennis shoes. “Shiiiine-'em-up!” He is sitting under as sign that reads “Shoe Hospital.”
Before I left I retrieved a piece of mail from my mom's box – a reminder asking her to please complete the survey they'd sent already from the first hospital she went to about her feelings on the care she received there. Mama said there'd be days like this. What she said was, “Life goes on.” Nothing if not original, my mother. Life in the form of surveys. Life in the form of computers generating junk mail. Perhaps there is Yelp on the other side and mom can critique the stupid hospital. Not sure what she'd say exactly, because the only contact I had in that place myself was parading through its halls with my sisters to try to retrieve my mother's clothes that no one there had bothered to send along with her or back to us: a pair of jeans and a tee shirt that read “Lima Bean Lovers Live Longer.”
The facts are so dumbly ironic, there is no commentary to highlight them, really.
At least in this direction no one tried to get me to read a copy of the eulogy they had with them for the funeral they were going to. No one shared with me with stories of their breast cancer, while I wept, unacknowledged, trapped in my seat by another delay and a jam packed terminal gate.
Back in Philly, they told me there was an earlier connection into San Jose I might make, but when I got here I saw that that flight was actually to San Diego. A difference of 460 miles. If it were only so easy – just exchange one saint for another. Swap out your requests. San Rafael, patron saint of health. San Francisco, watching over the animals. What's the difference, really? Just merge them all in an imaginary sacred overpass between the 5 and the 101. Crazy, west coast weirdos are we. The east coasters lost in our concrete maze of prayers.
August is over. It's a full month. The anniversary of when I met my husband comes in the month of August. The anniversary of when we arrived in Monterey 13 years ago. The anniversary of the first earthquake we experienced after arriving in Monterey. Our wedding anniversary and my birthday both come in August. 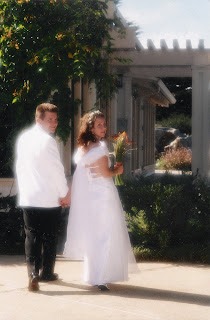 I have had zero time to type up or think out the oodles of journal pages and even more thoughts and dreams that never made it that far. I'm about to go off the grid, so to speak, for a few days, for a much-needed, long-ago-planned long weekend with the fam at a farm where I can sit by the river or under the apple trees and stir only at the dinner bell. So my lack of posting will continue for a few more days, but afterwards, I hope to be back more regularly.