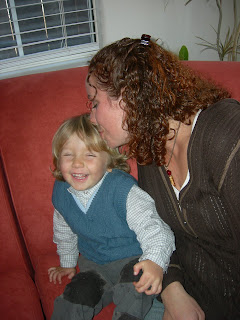 I can just look at my little boy and know unequivocally that he does not belong to me.

Sometimes I wish with great ferocity that he did, and other times I'm so relieved he doesn't I can barely keep from weeping. But either way, the fact remains.

I knew it early on, maybe even from the moment they placed his slick, pink body on mine, that although he is my son, he is a soul apart from me with his own gifts and purpose.

I am writing this down now in case there is a time I forget it, when I try to steer him toward something that is my challenge and not his, for when I am hunched over from trying to carry his pain. Even when I want it to be different, maintaining this clarity is helpful, dare I say, calming.

Exactly one year from today, I will be having a "Mess With Texas" party, celebrating whoever and whatever is elected instead of the Neanderthal that's dragged his knuckles around Pennsylvania Avenue for WAY too long.

I needed to come out of blog hibernation on this auspicious date to register just how tired I am of the media's snide attitude toward Dennis Kucinich. I'm not naïve enough to think he'll win any elections in 2008, but he's the bomb and thank god he's out there and maybe someday he'll be president and why does everyone feel like it's okay to treat him like a child?

Here's the latest evidence – an interview on National Public Radio's “On the Media” in which Brooke Gladstone could hardly contain her contempt. Just listen to her questions and her tone. MSNBC broke their contract with Kucinich, barring him from a recent Democratic debate in Nevada. Period. Contract broken. Nevada Supreme Court ruled in favor of MSNBC. Kucinich claims MSNBC – owned by GE – might not want him up there talking about a nuclear free future, a stop to war. Could he have a point? Uh, YEAH. DUH.

When I looked up the link to the interview for this entry, I was at least heartened to see that the people who left comments on it seemed to agree with me that the questioning was offensive.

It was a Saturday morning. The boys were at the dump, of course, and I was enjoying a leisurely shower without anyone barging in announcing on my behalf “All done! All done, Mama!”

Exiting the bathroom, I was jarred by a pounding on the door. Emily Cat and I both jumped and ran for the bedroom to wait it out. I figured it was just the usual – someone selling tamales or strawberries or Jesus. But the pounding came again. I peeked out to see a uniformed officer in the window.

Mr. Police Man is looking for someone who used to live at this address. He flashes me a wanted poster. Do I know him? Is he family?

This is not the first time I've fielded questions about people I've never met, but into whose shadow we have stepped. Back four addresses and three years ago, the place we lived was staked out while the cops determined whether we were telling the truth as to our lack of connection with the former tenant. (And that was the town where the cops are really bored – a source of panic in certain situations. Check out this flashback entry.)

Then there are the phone calls which have superseded our physical address. We've had our current number for two years now, but the creditors for the unfortunates who had it before us still call. Their tone is skeptical, as in, “You mean to tell me this is not the right number?” Dude, back off.

We are living just a step behind these lives that did not bask in a glowing spot light, but dashed off into the bushes to avoid a search light. They're just silly coincidences, I'm sure. And yet, I can't help but dwell (stick with what you do best). Is my family's association with criminality cool or creepy? (Lines are open; vote now!)

Isaac is very much in the stage where “pee-mans” are there to help people. He's not so up on the bad guy idea. He associates police with ambulances and fire engines which arrive to emergencies like when someone “goes boom down,” as well as their other official duties of delivering people to the “ha-iple” when they “no feel weal dood” and putting out “wires.” Isaac also often confuses police cars with taxi cabs. This worries me slightly, and so I feel like a police car camped in front of our house again could be a good thing – really seal the deal on the difference.

I'm not sure he'll get the chance to focus on cop vs cab, though. I think our link may be weakening. In this latest encounter, while standing in my doorway in a bathrobe before I even started shaking my head at the grainy black and white of a stocky bald man, the officer seemed to give up. He dropped the hand holding the paper as if it were weighted with cement. “Sorry to bother you,” he mumbled, and turned on his shiny black heels.