Isaac's birthday will be here in less than a month. He really wants a party. To date, I have managed to avoid any controversy or heartache over his lack of parties. Of course, it's not that we haven't celebrated.

When he turned one we had just moved and had a combination house-warming, bring your one-year-old over too kind of day.

When he turned two, we had – eh-hem – just moved again and served the friends that helped us some carrot cake with a candle on it.

At three, we tried a very small at home thing where a couple kids and Isaac dug in dry beans to find bouncy balls and took home seeds in clay pots instead of goodie bags.

Four was the new adventure of roller skating topped off with some ice cream and shared with our friends' twin girls.

I billed five as his big family/snow birthday, two things he doesn't usually experience. We spent that one at his grandparents' house in Massachusetts where grandma made him a strawberry topped cake to order and his cousins pulled him around the ice outside on an inflatable tire.

All in all, not bad, I'd say. And now we approach six. I thought I had this one in the bag – six is the year they are allowed to do behind-the-scenes tours at the aquarium. I mean, dude. Pick a friend, hit the tanks, twenty bucks later call it a birthday. Only problem is, it's not flying.

You must understand, I am contending with the insidiousness of things like the pony party, the bounce house blow out, and what I call the “drag net birthday” - invitations handed out to every flipping kid in the class before their parents even get a say, invite ev-er-y-one, doesn't matter what you think of them, what they mean to you, collect your present and eat your cake, too – which undoubtedly has been bought from Costco and contains five-inch thick day-glow green icing, and then send them home with gender specific goodie bags filled with plastic dollar store crap and candy.

Truth be told, I keep Isaac home from every birthday party I possibly can. I'm a proud evil mom. And he still goes to plenty...with Mike. I have no tolerance whatsoever for these fiestas or the idle chit chat that circulates among the parents during same.

The other day Isaac had in hand his second invitation in a week. There would be ponies. There would be lunch (MAJOR red flag – Capri Suns and pizza if you get off easy. Or else burgers and hot dogs your veggie kid can't eat at all served with Hot Cheetos and soda. It's like a psychedelic trip down the river of processed foods brought to you by your guide and companion: high fructose corn syrup.). We planned a family day and told the birthday boy's mom we'd be out of town. That Friday, the family brought cupcakes to school and the ponies were all the buzz. “I wanna go to Duncan's party!” came my boy's well-practiced whine.

The morning of the grand event our plans had shifted and I could no longer be a part of the family day. Isaac hadn't mentioned the party since his token whine, but Mike and I were careful not to let it get past the time of the soiree without directly addressing the fact that we wouldn't be there, lest it prove meltdown material later. We reminded him that we'd already told Duncan's family we couldn't make it and that maybe he could do something really special with Daddy that day. He was quiet for a minute, then he asked Mike to play “ice cream truck” with him (You have to walk up to the windows of the car as different customers and order.). No mention of ponies. Nothing. They went on to have a day involving a hike and homemade cookies.

When I think about this little incident, it's not unlike the triumphant feeling I had over the holidays when, killing time during intermission at a concert, Isaac sat oblivious to the two young boys in the row in front of us playing games on their parents' iphones while our family played several rollicking rounds of Rock, Paper, Scissors.

Look, I've got nothing against ponies or iphones, not exactly... It's just, well, those birthdays? They'll fly by faster than we're ready to admit. We live in a complicated world. Why drag our kids into it before we have to? Let's skip the bounce houses and ponies and let them take it one birthday at a time, with their feet firmly on the ground. 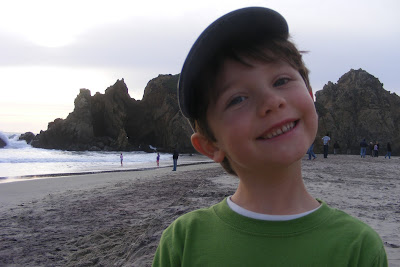 In a week that included discussions of who Martin Luther King, Jr and Cesar Chavez were, and why grandmom was cremated and not buried, and how anyone knows what the center of the earth is like, and if dogs or cats can see better, and why hurricanes don't come to where we live, and are we sure?, and whether alligators are omnivores... there was also the following conversation, which reminds me once again that children require simple answers, not because they are simple, but because there is just so much freaking else to get on with.

"Do Lily and Emma have a dad?"

"Nope. They have two moms."

"Do computers know EVERYTHING in the whole entire world??"